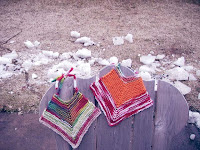 It would have been easy to get on a bib jag but I managed to stop myself before it got out of hand. Only made two.

It has been warm-ish lately and the ice on the patio started to melt. I decided to help it and have been chiseling away at the edges with a shovel. Today I lost patience and attacked it with a sixteen-pound sledge hammer. That worked great, both to break up the glacier and vent a little bad humor.

Hey, Ann, click on the picture and you can see a bit of the vole trail in the grass in the background. Drives Dad nuts.

Day before yesterday I was sitting on the couch knitting along on my sock and staring at the Knit-a-Day calendar perched on the coffee table. None of the projects I had on the needles were small and quick (the quick part being most important since patience isn't one of my virtues) and I noticed that the pattern for that day was a mitered cotton bib with I-cord ties. I had never made I-cord before, wanted to learn, and besides my son's friends' new baby girl probably would need a bib someday soon. I had that giant ball of dishcloth cotton leftovers from my failed attempt to capture the craft show crocheted dishcloth market last fall, so there was plenty of raw material on hand. 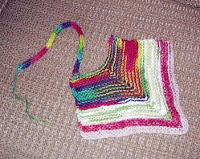 After knitting 15 rows or so and realizing I was perfectly capable of screwing up even a pattern as simple as "knit one row, knit almost half the stitches, make a decrease, knit the other half, repeat," frogging it, and starting over--twice, I figured out the 6-line pattern and got the thing made. Karen at knit night at Patti's Yarn Shop last night showed me how to pick up stitches (again) and how to I-cord. Pretty easy and fairly magical. Got one I-cord tie done before bed last night, but I wanted to put up a picture now. I'll finish it as soon as I sign off. I promise.

I decided to make the mid-March Dishcloth KAL to try out the Lion Brand Cotton-Ease yarn. As I knit on it I tried to decide what I was making, but had absolutely no luck. After 5 days of rows emailed to me and knit, I bound off--and still couldn't figure out what it was supposed to be. Finally I got on the Dishcloth KAL site. It's supposed to be an illusion bunny. Hmmm. Mine looks like theirs. I still don't see it. It looks like a lamp to me. Opinions? 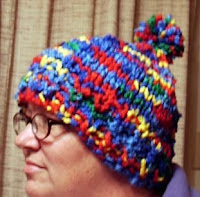 For some reason I felt compelled to cast on a Twisted Rib hat yesterday. I don't know why. I didn't need another hat. I have lots of hats, but the yarn (Patons Melody in Good Sports) caught my eye when I was stash trolling for another yarn and I found myself casting on and knitting. It's only 24 rows so it doesn't take long. It turned out a bit big though. I'll donate it. Somewhere there's a big-headed kid that needs a hat. 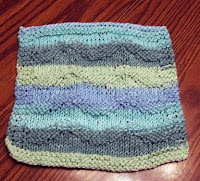 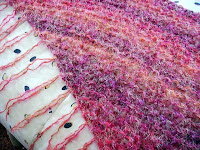 I have an FO--the Short & Sassy Shawl from One-Skein Wonders I started, oh, way back in September that got shoved into a tote under another tote behind the rocker in the corner. I noticed it last week while browsing my Ravelry projects and thought, hey, I should finish that. So I did. I had forgotten one interesting aspect of the yarn (Yarn Bee Soft Delights Extreme from Hobby Lobby) which is that last night I looked at my lap to discover that I was covered from nipples to knees with fuzz, little brightly colored accent threads from the yarn. Should be awesome worn with a black shirt, right?

And today I proved once again that I am a dishcloth ho. Even though I have 2 socks (well, 3 actually) on the needles, one sweater, and two secret projects on the go, I still had to cast on a Wave Pool Washcloth because I suddenly remembered the ocean colors of a skein of Sugar 'n Cream Country Stripes and wanted to see how it looked. No wonder I have hand cramps.

Best of all, the tiny yellow crocuses I planted in front of the rental side of the duplex are up and just about ready to bloom. Looks like spring might be on the way after all, kids. 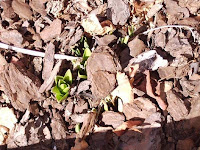 Look what I saw this morning when I went out to get the morning paper! (Click to embiggen.) It's a little patch of hyacinths nestled in the corner heated by sunshine reflected from the brick front of the house. Ahhh, green.

Posted by Barbara at 4:33 PM No comments:

I Had an Accident 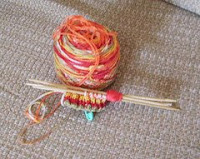 If you look back at the previous post you'll see I was frustrated by my lack of finishing and decided not to cast anything on until I had something done. Well, um, that didn't really work out very well. I kind of dozed off on the couch Monday night and awoke to find this in my hands. It's the 6 sts/inch pattern from Getting Started Knitting Socks by Ann Budd. I had heard the yarn, Filatura di Crosa Maxime Print, calling to me out of my stash for the last couple of weeks and was able to ignore it, but I guess my resistance was low and I had a yarn accident. No other projects were injured in the casting on. 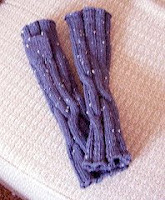 I finished the Dashings for Dave last night, though. They feel great on but sure look funny just lying there, like long cabled tubes. Well, I guess that's what they are, but I think they're too long for me. Good thing they're for someone else, huh?
Posted by Barbara at 11:19 AM 1 comment:

Too Much Starting, Not Enough Finishing

ered around my feet a

nd got a little frustrated. The only FO I have from the weekend is a Cancer Awareness Ribbon dishcloth I zipped through for Ryan. I love the way it turned out in variegated yarn--but then I love everything in variegated yarn! I knitted a few more rows on my Red Licorice Sweater, and recovered the lost ground on Dashing #2. No sock progress, I had to frog one of the secret projects, but made good progress on the other secret project. Check out my Ravelry page for info on them. I'm bookie there too.

BTW, I bought some of the yarn for the Red Licorice sweater in Jo-Ann's and some online and (this is the amazing part) the store yarn and the online yarn have the same dyelot. What are the odds?

And Blogger's not letting me upload pix. I'll try again later. It's Monday.

Ah, pictures. Finally.
Posted by Barbara at 9:26 AM No comments:

Two Steps Forward, One Step Back 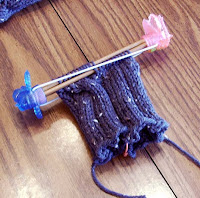 I guess I should have seen it coming. I've been knitting pretty steady since I learned last summer and, aside from a few stitches or a row here and there, I haven't had to frog anything very severely. Yesterday I got home from work and pulled out Dashing #2 (completed Dashing #1 above) which was ready for its first cable round. Foolishly thinking I was familiar enough with the pattern to just plunge in without rereading it, I clicked on Cash Cab on TV and started knitting. After the cable row, I kept knitting the next 9 rows until time (about 9:30) for the second cable round, when I discovered that 10 rows back I had made 4 cables instead of 2. I had to rip back all the work I had done all evening, lay it to waste, and start over. Oh, not from the cast on row but I'm a pretty slow knitter, so losing an evening's concentrated work was pretty dem 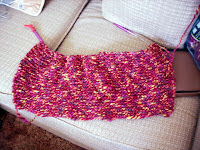 oralizing. *sigh* I'm such a trial to myself.

As a reward I knitted a few more sleeve rows on my first ever sweater, knitting it onto a circular needle so it would be easier to deal with the ever-widening stitches. It's pretty, isn't it? Mmm, Red Licorice. 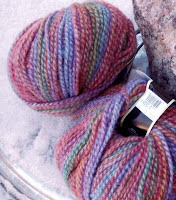 I didn't go shopping for new yarn, no I didn't. I went to return some just-in-case-I-can't-get-more-of-the-right-color yarn, now that the right 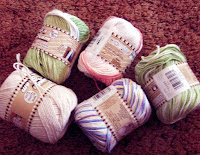 color yarn appeared on the front porch in a box the other day. Yippee.

Evidently it's against the laws of the universe to go to a store than sells yarn and not buy some. I was actually going to try and find a notion I need to make something that's a secret. Jo-Ann's didn't have the notion, but it did have these yarns that all-together cost $1 less than the 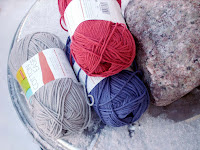 yarn I returned. They had Sugar n' Cream for 5/$10 (who can resist that?) and then I had two 40% off coupons and one 50% off coupon so I got some Cotton Ease. The variegated stuff is Sensations Cosetta which is evidently discontinued. It's gonna be a hat.

Then I drove to 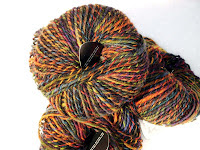 DePere to go to Loops and Links. Shana was glad to see me since I hadn't been back since we left for Bonaire way back in January. She didn't have the notion either, but I bought a Spring/Summer copy of Knit Simple (I should subscribe to that mag. I like it.) and look at the pretty yarn that was on the Wall O' Savings! It's Takhi Shannon in 011 colorway, 100% wool and enough for a hat and gloves. Yum.

I didn't buy any yarn at Hobby Lobby but they also didn't have the notion. I bought Kristin Nicholas' Kristin Knits because of the worsted weight, multicolor yarn socks patterns, which I will not cast on until at least some of the five things I have on the needles is finished. Cross my heart. (Besides I decided I want to use 4 or 5 different colors of Galway tweed to make the socks and Links and Loops isn't open on Sunday.)

The only things I bought at Michaels (no notion there either) were a couple of (on sale) seashell melt & pour soap molds because mine is cracked. It was fun but I still don't have that notion. Guess I search online. Drat.

I can knit underwater!