I Forgot An FO 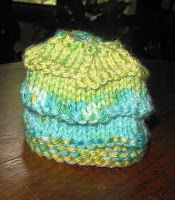 I was updating my 2013 Finished Objects list over there in the left hand column and I forgot about a Too Early Birthday Hat I made at Friday Night Knitting week before last.  The yarn's called Happy Baby and I really like the colors, don't you?  I need to rework this pattern so I can also make it for full-term babies because I really like the design and I love the colors of this yarn, which is... Premier Yarns Everyday Soft Worsted Prints.  They have lovely bright variegated colors, and they're machine washable and dryable.  What's not to love?
Posted by Barbara at 5:05 PM No comments:

One Finished, One Begun & Finished 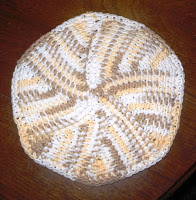 Let's get to that last bit first.  Don't think I've suddenly become a whirlwind knitter because I haven't.  The urge to cast on a few things has been nearly irresistible, nearly but not completely (I'm still fighting to finish what I've got going first), so when I was downstairs looking to see how much I have left of a yarn someone on Ravelry asked me about  (not enough to share) I ran across the BIG skein of Sugar 'n Cream dishcloth cotton in the Toasted Marshmallow colorway (sadly discontinued) with an afghan hook stuck in it.  It struck me that I could make a dishcloth in an evening and maybe bleed off some of that startitis.  So I did.  Make one, I mean.  I nearly finished it in one evening but the sandman came calling and I was powerless to resist.  I like having a couple dishcloths on hand just in case I'm in the mood to give someone something and I was down to one so I needed to make it, plus I really like the yarn colors.  So sedate and restful, unlike my usual knitting/crocheting choices.

Thursday at work I focused solely on binding off the everlasting ruffle of the Wildflowers Shawlette.  Thanks to Bay Lakes Knitting Guild Founding Mother, TS, I used a crocheted castoff which is miles less annoying to do than a standard one for that long, long, long row of stitches.  Thanks again, TS!  The wool was very scratchy to knit with so I'm hoping that a good long soak in wool wash will help.  Fingers crossed, because I love the way it turned out.  Now I have a sedate one and a wild one, one to suit my mood (sometimes in the same day).

One Thing At A Time 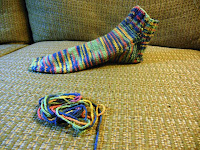 Lately that's my speed.  I finished the Summer Anklet sock Friday evening.  I was confident that I would run out of the festive stripe Cascade Fixation I was using and have to make the toe with the pale yellow I had in the stash.  In fact, I was kind of counting on it. Guess what?  I ended up having enough to make it all in the variegated with a few yards leftover.  I feel kind of cheated, like I should have put that yellow on there anyway and had a bit more left, but I finished it, took its picture, and it's done.  Done, do you hear me?  Done.  Finished.  Finito.  *dusts off hands*  (don't tell anybody but I went into the stash yesterday and got another skein of Fixation to cast on another one, shhhh) 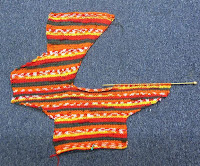 I finished the left front of the Bean's Kimono Thursday night at the Guild's Knit in the Park night.  I did have to tink (knit backwards) the last 6 rows because I forgot that I'd done a garter stitch edge on the back.  *head, slap*  I'll be plunging in to make the right front, maybe today, plus I saw a booties pattern that just might work with this.  (one thing at a time, Barbara) 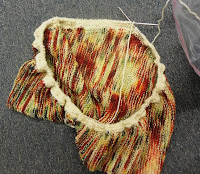 I'm working on the ruffle edging of the Wildflowers Shawlette.  It's kind of a slog.  You increase a lot making a ruffle so I'm working on hundreds of stitches and it's slow going but I'm determined, although for some reason I'm not as enthusiastic as I was before.  Must be the warmer weather because I sure like the way it's looking. 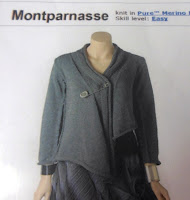 I have to finish the above two projects before I embark on any others.  Have.  To.  No new socks, no matter how pretty the yarn is (but it's only an anklet, my inner 9-year-old whines).  No unearthing the leftovers of a few boot socks to start the next one of those, winter's far away.  *fingers crossed*  No casting on the back of this sweater I'm enamored with.  Before I cast it on I have to do some figuring because the pattern doesn't go up to my size.  It's not a huge deal but something that merits some calm consideration and a little math before I dive into the deep end.


It's too bad because I'm kind of in an "everybody into the pool" mood today.  I could do some damage with all the pairs of needles and yarn I have at my disposal but I learned the hard way that I can't get something half done and then put it away for a year.  That way leads to frustration and frogging.
Posted by Barbara at 12:46 PM No comments: 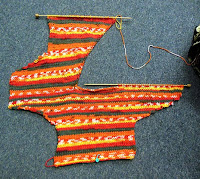 I like doing origami with paper.  I'm not terribly good at it or terribly dedicated and I for sure don't remember how to make very many figures.  (I keep in practice making origami balloons because they're so much fun to play with and they amuse children of all ages.  Ask me to make you one sometime, you'll be amazed--and amused.  Toys!)  The ultimate in knitting origami is Elizabeth Zimmerman's Baby Surprise Jacket, but this One-Piece Baby Kimono by Cristina Shiffman has a lot of origami in it too.  I'm nearing the finish of the left front segment and it's been a blast to knit.  Not hard, not by a long shot, but you need to think when you're knitting it and that can sometimes be a challenge (at least for me).  Our young friends, K&GZ, are expecting their first baby in October and KZ is not a pastel girl.  She's got personality to burn and is always dressed to be noticed in bright colors and fun styles, so I hope that the Bean likes color too.  I knew that this was the right yarn for the Bean's sweater the minute I laid eyes on it.

When I was finishing the Spring Boot Sock last week I remembered how much I like having a sock OTN, and I remembered that I had an anklet OTN that got pushed aside last fall, AND I even remembered where I'd put it in the sinkhole that is my knitting area right now.  (I see a weekend organizing fest in my near future)  So I zoomed downstairs last night and resurrected it.  I added a couple rows last night while watching a Curb Appeal episode that I'd DVR'ed so it knows that I mean to finish it.  Don't want to raise its hopes only to have it end up downstairs unfinished again.  I don't know why I quit on it anyway, I'm through the "hard" part (the gusset, the never-ending [to my usually patient but not in this instance self] decreases of the gusset), now comes the foot and toe.  Beyond all logic I love the toe decreases and I especially love the Kitchener stitch.  It's a magic trick with yarn.  (thanks one more time to my beloved DD who gave me a little booklet when I started knitting with the Kitchener mantra in it:  knit off, purl on, purl off, knit on that makes it possible for me to make that fancy toe join effortlessly, so effortlessly I even impress myself.) (huh, when finding a video to link to show you, I discovered that I haven't been doing the "set up" part, it's worked for me but maybe it'll be even more impressive if I do it all.)  Thanks also go to Z-Dawg for the nugget of yarn that is becoming this sock.  When it runs out before the toe (which I know it will) there will be a lovely pale yellow to complete the sock.  What?  No one will see.  It goes in a shoe anyway, besides who wants a plain sock?
Posted by Barbara at 12:32 PM No comments: 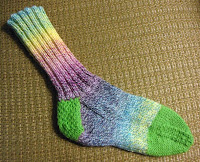 Because the weather hasn't warmed up to late-spring or early-summer temps I've continued knitting on the last boot sock of the winter.  I love the way the yarn looks and I love the acid green toe and heel.  It'll have to get a lot colder before I'll be able to decide if I love or don't love the ribbed leg.  I'm thinking that for the next boot sock I cast on I'll use a different yarn leftover for each and every part of the sock.  It should look grand and crazy.

Durwood was admiring it last night and demanded that I take its picture inside out.  When I asked why he said because no one ever sees it, it just gets walked on, so I did.

These Have Not Been Knitting Times

Nor crocheting, nor sewing.  I planted the garden and most of the flowerpots but my eyes have been bothering me so I haven't been doing any of those crafty things.  But there's always Friday Night Knitting so I've got a bit to show you.

I finished the body of the Wildflowers shawlette last week and got a start on the ruffle on Friday.

On Monday at work I finished the sleeve increases of the Bean's Kimono.  Next come 6 even rows before the interesting work of knitting the fronts begins. 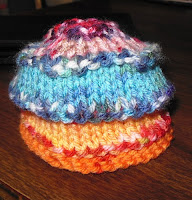 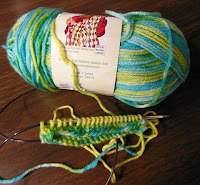 The only knitting I did during my week at The Clearing was making this Too Early Birthday preemie hats out of the ends of skeins, and I cast on another one the other night.  I like the colors of this skein, don't you?

I think my knitting mojo's on hiatus.
Posted by Barbara at 2:04 PM No comments:

I can knit underwater!